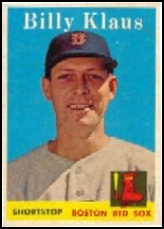 The brother of Bobby Klaus, scrappy infielder Billy Klaus had cups of coffee with the Boston Braves/Milwaukee Braves in 1952 and 1953. After being acquired by the Boston Red Sox following the 1954 season, which he spent in the minor leagues, he became the team's regular shortstop in 1955, hitting .283 with 7 homers and 60 RBI and finishing second to Herb Score in the Rookie of the Year Award voting. Two years later, in 1957, he hit a career-best 10 homers with the club. However, in 1958, he struggled, hitting just .159, and he was traded to the Baltimore Orioles after the season.

He played five more seasons in the majors with the O's, Washington Senators, and Philadelphia Phillies. In 1960, he had nine hits, nine walks and nine strikeouts, meaning he holds the record for most hits, walks and strikeouts in a season with all three being equal amounts. After his big league career ended, Klaus played two years in Japan for the Chunichi Dragons.

In 1969, he returned to Sarasota, Florida, where he had previously spent spring training, and started a painting business. Klaus died of lung cancer at age 77 in 2006.