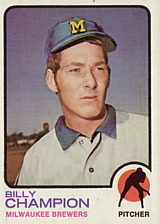 He later was a scout for the Chicago Cubs, starting in 1983, and signing Drew Hall among others. He also was a minor league and international pitching coach before dying at 69 in 2017.