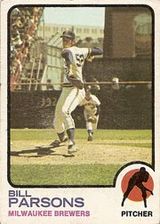 Bill Parsons had a four-year career as a major league pitcher, coming in second in the 1971 American League Rookie of the Year Award voting. He went 13-17 with a 3.20 ERA as a rookie with the Milwaukee Brewers that season. Parsons was named Sporting News Rookie Pitcher of the year.

Parsons was drafted in the 7th round by the Seattle Pilots in the 1968 amateur draft and worked his way up the minors with the Newark Co-Pilots in 1968 and the Billings Mustangs and Clinton Pilots in 1969. At Clinton, he posted a 1.57 ERA in 69 innings. In 1970, the parent team moved to Milwaukee, while he pitched for the Portland Beavers of the Pacific Coast League at the age of 22.

In 1973, he was in only 20 games with an ERA of 6.79 as his arm felt the stress of having pitched over 200 innings the previous two seasons. In 1974, after being traded to the Oakland Athletics, he pitched only 2 innings in the majors. He was traded to the St. Louis Cardinals in July 1975 but never appeared in the majors with them.