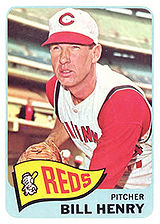 Bill Henry pitched 16 seasons in the majors, mostly as a reliever. He was a teammate at various times of Ted Williams, Ernie Banks, Frank Robinson and Willie Mays.

Henry was named to the two 1960 All-Star Games and appeared in the 1961 World Series. During his last four years in the majors, he was either the oldest or the second-oldest player in the league each year.

In August 2007, a widely-circulated obituary originating in Lakeland, FL announced the death of former major league pitcher Bill Henry at age 83. However, research by SABR's Dave Lambert located Henry alive and well and residing in Deer Park, TX. SABR's further inquiry had been prompted by discrepancies concerning Henry's date and place of birth in the obituary. Soon after, it emerged that the dead man had been claiming to be the former pitcher, hence the error. The Florida man's widow, who had been married to him for 19 years, said: "I just took his word that that's who he was. It's an awful shock. It's hard. I was married to somebody that maybe I didn't know."