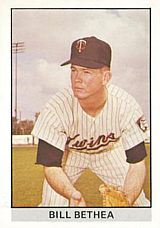 Bill Bethea played in the major leagues with the Minnesota Twins in 1964. He appeared in 10 games between September 13th and September 29th, getting 30 at-bats. He mostly played second base, a position where the Twins used nine different players. The most-utilized second baseman that year was Bernie Allen. Through 2019, the only other major leaguers with a last name starting with Beth are Christian Bethancourt, a two-way player in the 2010s, and Jim Bethke, who broke in a year after Bethea in 1965.

Bethea was at the University of Texas from 1961 to 1963, at a time when the Longhorns were going to the College World Series each year. He started playing in the minors in 1963, hitting .371 at an early stop at Billings. He was originally signed by the St. Louis Cardinals but was then selected by the Twins in the first-year player draft after his first pro season. He played in the minors through 1969, a year when he was at Hawaii as a teammate of Bo Belinsky.

Bethea was an assistant coach at University of Texas for 21 years and spent 1990-1991 as an academic career counselor in the Texas athletic department. He coached Arkansas State University from 1992-2002. His brother, Jim, played in the minor leagues from 1959 to 1961.