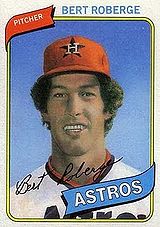 While Bert Roberge spoke very little French himself, his parents were fluent in the language, which made them a big hit after he was traded to the Montreal Expos in 1985. French-language broadcasters in Montreal would usually call him by his full first name, Bertrand, pronounced in the French manner. His Franco-American origins had already been noted by General Manager Roland Hemond, himself a francophone, when he had signed him as a free agent at the winter meetings before the 1984 season. When asked about the signing, he said "I got him first because he's French, and second because I think he can pitch." The following year, he announced his trade to the Expos in French to a bemused media contingent.

His origins aside, Roberge had some success as a relief pitcher. As a rookie with the Houston Astros in 1979, he went 3-0 with 4 saves and a 1.69 ERA in 26 games as the Astros had their best year up to that point of their history. He won his two decisions in 1980, but his ERA rose to 5.92 and he was back in the minors by the time the Astros won a division title for the first time. He resurfaced with the team in 1982, going 1-2, 4.21 with 3 saves. After spending 1983 in the minors, he went 3-3, 3.76 in 21 games with the White Sox in 1984. Officially, he was traded to the Expos in return for infielder Bryan Little, but in fact the two teams made two related trades that day, with the other seeing reliever Bob James head to Chicago in return for IF Vance Law; the two trades worked out for both teams, as James became the White Sox's closer, while Law and Roberge were solid additions in Montreal. Roberge's first season with the Expos, in 1985, was his busiest one at the major league level, as he pitched 42 times, logging 68 innings, with a record of 3-3, 3.44 and 2 saves. He was one the middle relievers setting up closer Jeff Reardon that season, alongside Tim Burke and Gary Lucas. He came back to Montreal in 1986 but had a rougher time of it, with an 0-4 record and a 6.28 ERA. It was his final major league season.