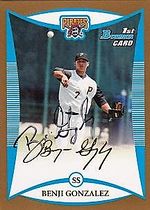 Infielder Bengie Gonzalez was taken by the Pittsburgh Pirates in the 7th round of the 2008 amateur draft, two picks ahead of catcher Caleb Joseph. Joe Salermo was the signing scout.

He remained in the Pirates system through 2013, never rising above Advanced A ball. He was traded to the San Diego Padres in 2014 and played in their system through 2015, reaching Triple A for the first time in the latter campaign, and in 2016 he joined the Seattle Mariners organization. In 2017, he began in the Minnesota Twins system before joining the Washington Nationals farm, where he remained to begin 2018.

Defensively versatile, Gonzalez manned all the positions save for catcher, pitcher and first base at least once by 2013. Offensively, he stole as many as 27 bases (in 2013), but rarely hit for high average or power. In fact, in regular season play, he did not hit more than one home run in a season until 2014, and through 2017 averaged just one home run every 281 plate appearances.

He was also a regular in the Puerto Rican Winter League.

He was a MiLB.com Organization All-Star in 2016.