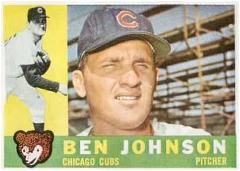 He had one career major league save. It came on April 14, 1960. He got Jim Davenport to ground out for the last out of the Cubs' 6-5 win over the San Francisco Giants.

He served in the United States Marine Corps in 1952-1953, when he was out of organized baseball. After his retirement he worked for the Monsanto corporation in his hometown of Greenwood, SC. He passed away there in 2020, a few days short of his 89th birthday.