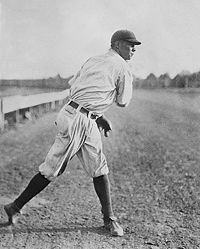 Ben Dyer played six seasons in the majors although he had only 207 at-bats lifetime. He played primarily third base and shortstop.

Dyer broke in with the New York Giants in 1914, although the New York Times in 1915 reported that Dyer had trained with the club a few seasons earlier. In 1915 he was with St. Paul and recalled to the Giants.

The New York Times of February 12, 1920, reported that Dyer was a holdout and also wanted his release as he had been offered a managerial job in the Central League.