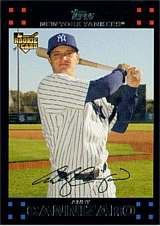 Andy Cannizaro started at shortstop as a freshman for Tulane, hitting .291 and stealing 25 bases for one of the top teams in the country. The next year, he improved to .370 and swiped 31 bags. He led Conference USA in stolen bases and made the All-Conference team as one of the infielders. In 2001, the senior batted .395 with 80 runs scored, 34 doubles and 52 steals, third-most in NCAA Division I. He again was an All-Conference pick and helped the Green Wave to their first College World Series, in which Andy hit .500. At the time, he held Tulane single season and career records for hits (118/350), doubles (34/85) and stolen bases (52/128).

Once his playing days ceased, Andy was a scout for the Yankees in the south for five years. He was an assistant coach at LSU from 2014-2016. He then replaced John Cohen as head coach at Mississippi State when Cohen was promoted to athletic director. Andy resigned in February 2018 when it was revealed he had an extramarital affair with an athletic department employee. In 2019, he became the head coach at Holy Cross School in New Orleans.