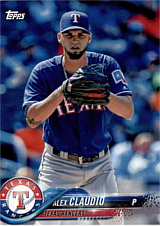 Rail-thin pitcher Alex Claudio was a 27th round draft choice by the Texas Rangers in 2010, out of high school in Puerto Rico. He was the 2019 National League leader in appearances with the Milwaukee Brewers.

Claudio made his major league debut for Texas on August 13, 2014, his fifth season in the Rangers' organization. He had moved around a lot during that time, as Texas was already his fourth stop of 2014. He was used mainly as a reliever during his minor league apprenticeship, although he did start a total of 13 games out of 114 games, most of those starts coming in 2014 before the call up. He was 6-3 with an excellent 1.66 ERA in 27 games when he arrived in the Lone Star State. Claudio set a couple of club marks when he made his debut in the 8th inning of a 10-1 blowout loss to the Tampa Bay Rays: he was the 56th different player used by the team that year and the 34th pitcher. He pitched a perfect inning after arriving late at the ballpark, having only been called up after Yu Darvish was placed on the disabled list earlier that day, and he was expected to be sent down after the game to make way for the next day's starter, Robbie Ross. After his one inning of work, catcher J.P. Arencibia succeeded him on the mound to pitch the 9th in mop-up duty, upping the total number of pitchers used that year to 36 with 6 weeks still left to play. Alex, not J.P., ended up pitching 15 times for the Rangers, with no decisions and a 2.92 ERA in 12 1/3 innings. He had a similar stat line in 2015, when he pitched another 18 games in relief and went 1-1 with an ERA of 2.87 in 15 2/3 innings.