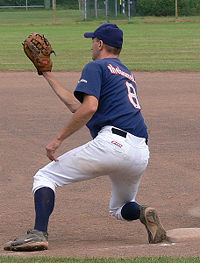 Albert van Vuure has been a pitcher for HCAW in the Netherlands. He has not yet played in the Hoofdklasse from 2005-2009. He was on the Dutch national team roster briefly in 2001-2002 but did not play in any major tournaments for them due to injuries.

This biographical article is missing the person's: height weight
Retrieved from "https://www.baseball-reference.com/bpv/index.php?title=Albert_van_Vuure&oldid=613338"
Categories: