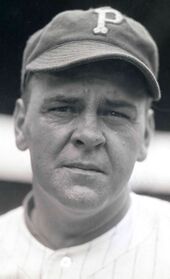 Albert Richard Nixon ("Al") played 422 games in the majors leagues, but up to the age of 35 had only appeared in 21 of them. Almost all of his games were thereafter, and a good portion were after he turned 40.

Al was born in Atlantic City, NJ, the first of three major leaguers (through 2019) born there. The minor league record shows him starting in the minors at age 26, and he first came to the majors ar age 29. He spent six seasons with the Beaumont Oilers, and was also with other Southern teams between 1912 and 1920.

In 1921, he finally hit the bigtime for good, joining the 1921 Boston Braves and playing 55 games. He was the oldest player on the team, and while he didn't hit particularly well, he stayed on the team in 1922 and 1923, getting ever more plate appearances.

Al has gotten attention for being one of the few individuals who batted right and threw left. He has also garnered a lot of attention for his name, sometimes being put on "Watergate" teams, along with other players such as Sam Agnew.

One site [1] states he was banned from baseball for two seasons.