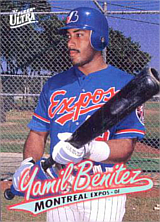 Yamil Benítez made a great first impression with the Kansas City Royals. In his first nine games with the team in 1997, he posted a .379 batting average with two homers, including a three-run shot in his first at-bat with the team. He had a similar good start to his career with the Montreal Expos in 1995, hitting .385 with 2 doubles, a triple and 2 homers in a 14-game September call-up. After his one season with the Royals, Benítez was selected by the Arizona Diamondbacks in the 1998 expansion draft. He was a member of the D-Backs in their inaugural season in 1998, hitting .199 in 91 games in what proved to be his last big league action.