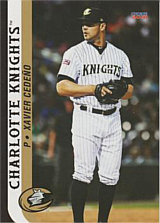 Pitcher Xavier Cedeño was selected by the Colorado Rockies as a draft-and-follow in the 31st round of the 2004 amateur draft. After a year of junior college he was signed by scout Jorge de Posada and played five seasons in the Rockies' organization. Cedeño was released by the Rockies in March 2010 and was out of pro ball until being signed by the Houston Astros in December 2010. Cedeño reached the majors with the team late in 2011, seeing time in each of the next nine seasons as a LOOGY.