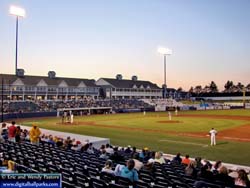 Photograph: Courtesy of and Submitted by (c) Eric and Wendy Pastore http://www.digitalballparks.com

Locate in the Chums Village development three miles south of Traverse City, MI, Wuerfel Park is the home field of the Traverse City Beach Bums of the Independent Frontier League. Wuerfel Park is owned by Wuerfel Sports Development LLC. The groundbreaking for the Park took place in late 2004 and was completed in time for the Beach Bums' inaugural 2006 baseball season. The stadium was built at a cost of $8 million, and was privately financed by the owners John and Leslye Wuerfel. The Wuerfels also own Wuerfel Resorts, which is responsible for hotels and resorts in northern Michigan. This building tradition is directly reflected in the Architecture of Wuerfel Park which very much resembles that of a resort or ski chalet, and is probably the most distinct and unique feature of the park.

Following the 2007 season, Wuerfel Park underwent renovations to remove the natural grass playing surface and outfit the field with "GameDay XPe turf", made by GeneralSports Venue.

The stadium has 4,500 hard seats and an overall capacity exceeding 5,500 people.

Ticket prices at the stadium are $10 for box seats and $6 lawn.