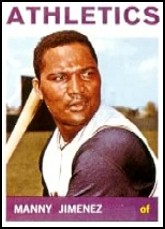 Jimenez had come from the Mexican League prior to 1958, and was in the Milwaukee Braves organization before he was with the A's. After his days with the Pirates he was traded to the Chicago Cubs organization.

He managed in the Dominican Summer League in 2006.

His brother Elvio Jimenez played one game in October 1964 for the New York Yankees, getting 6 at-bats and two hits.