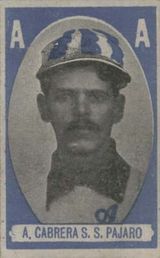 Shortstop Al Cabrera played his one and only major league game on May 16, 1913, for the St. Louis Cardinals at age 32. He went 0-for-2 at the plate. From 1901 to 1920, Cabrera was a regular in the Cuban Winter League, managing there later in the 1920s. He was also in the minors for eight years, playing for teams in the Northeast.

An article in Sporting Life, April 22, 1916, indicated there were 16 Cubans playing organized baseball in the U.S., of which Cabrera was one. He was generally called Alfredo in the press.

Cabrera made history as he became the first Spanish-born major leaguer: the Canary Islands were, and are, part of Spain. Further, since the islands are off the coast of Africa (not Europe), he can be considered the first African-born major leaguer, at least until Gift Ngoepe, who was undoubtedly African, made his debut in 2017.