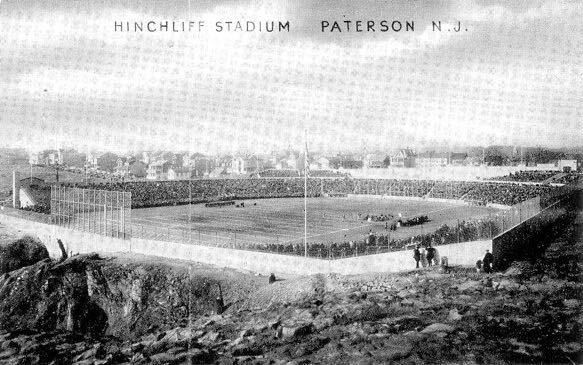 Hinchliffe Stadium in Paterson, New Jersey was home to the New York Black Yankees. Ground was broken on a large renovation project this year. Used with the permission of Hinchliffe Stadium.

Regrettably, almost all home parks of Major Negro League teams from 1920–1948 are now gone, existing mostly in black & white photographs and the graying memories of the remaining fans who saw games there. Yet there are still a handful of places where one can find former Negro League home ballparks. One of them, Rickwood Field, is the oldest professional ballpark still in use today. Two others are in active usage as city recreation venues. Two more are about to be rehabilitated after years of searching for funding.

Why are there so few of these historic venues still standing? The biggest reason is that the United States has little use for former ballparks—big-league or bush-league—whether they were historically associated with Black Baseball teams or so-called “Organized Baseball” teams. On the traditional MLB side of the ledger, only Fenway Park and Wrigley Field remain from the first half of the twentieth century. Most big-league ballparks were demolished shortly after their replacement opened, sometimes simply to provide more parking spaces for their adjacent replacement (e.g., Comiskey Park in Chicago and Veterans Stadium in Philadelphia).

On the Major Negro Leagues side of the ledger, most prominent Black teams played in rented quarters, forced to pick their game dates around the schedule of a White minor-league or major-league club. Only a few fortunate Negro League teams owned their own ballparks or enjoyed the benefits of being the primary tenants in their home park.

Baseball fans and historians can rejoice that a few of these segregated fields of dreams survive to this day, and there has been good news in recent years about preserving them. Herewith a brief sketch of each along with links to Web sites with more information and maps of these historic sites.

Opened in 1910, Rickwood remains in use as a venue for high school and college baseball. The Double-A Birmingham Barons of the Southern League play one game per year there—the “Rickwood Classic”—as a fundraiser for the Friends of Rickwood, who do a great job with the historic site.

Rickwood was the home of the Birmingham Black Barons from the mid-1920s through 1961, the last season played by the Negro American League (NAL). (The NAL, however, is not considered a major league after 1948.) It was the home park of the minor-league Birmingham Barons of the originally segregated Southern Association and then of the Southern League through 1987.

Because most of Rickwood’s historic structure remains and the park is well-maintained, it has been used as a set for the baseball scenes in many period movies, including Ron Shelton’s dreadful 1994 flop Cobb.

Games in three Negro World Series—1943, 1944, and 1948—were played at Rickwood, with the NAL champion Black Barons losing each series to the dynastic Homestead Grays, champions of the Negro National League (NNL).

Hamtramck Stadium opened in 1930 as the new home of the Detroit Stars, who were pushed out of Mack Park by hostile White neighbors on the East Side of Detroit. It was home to the Detroit Stars in the 1930s as well as the powerhouse Detroit Wolves, who played there in 1932 for half a season before folding.

Hamtramck is a small city (two square miles) about four miles northeast of downtown Detroit, surrounded by the City of Detroit. The historic Stadium is on the verge of rebirth, with an announcement expected soon that funding has been secured to rehabilitate the grandstand. The Friends of Historic Hamtramck Stadium restored the infield in 2020 and successfully petitioned Hamtramck City Council to name the field “Turkey Stearnes Field at Historic Hamtramck Stadium.”

In 1930, the final three games of the NNL Championship Series were played in Hamtramck, with the Detroit Stars losing to the St. Louis Stars in seven games.

Opened on the city’s East Side in 1910 for Cleveland’s American League franchise, which would eventually be nicknamed the “Indians.” From 1932 through 1946, the Indians split their home games between League Park in the Hough neighborhood and Municipal (later Cleveland) Stadium on the downtown lakefront. From 1942–1948, the powerful NAL Cleveland Buckeyes also called League Park home, sweeping the Homestead Grays in the 1945 Negro World Series but losing the World Series to the NNL New York Cubans in 1947.

Most of League Park’s structure was demolished in 1951, but the two-story ticket and team offices were saved, along with part of the exterior grandstand wall on the first base side. A new community center was added and the park was reopened in 2014 by the City of Cleveland for youth baseball. However, the field was resurfaced with artificial turf. The Cleveland Baseball Heritage Museum maintains a worth-visiting set of exhibits in the former ticket offices. The field is maintained by the Cleveland Department of Parks, Recreation and Properties.

After almost two decades of advocacy and hard work, the Friends of Hinchliffe Stadium hit a grand slam home run this year when ground was broken on the $94 million Hinchliffe Stadium Neighborhood Restoration Project that includes rehabilitation of the huge Art Deco Stadium.

Just west of downtown Paterson, New Jersey, Hinchliffe dramatically sits on a bluff above the Paterson Great Falls National Historical Park and the Falls of the Passaic River. It is owned by the Paterson school district. The enormous venue was built around a 440-yard track like many sports stadia erected after World War I. Because of that design, Hinchliffe was better suited for track and field sports and football than baseball.

Hall of Famer and underappreciated pioneer Larry Doby played prep school baseball and football at Hinchliffe. Negro League baseball was played there as well, mostly by the woeful New York Black Yankees in the 1930s and 1940s. According to Seamheads, the Black Yankees’ won-lost percentage for their lifespan was .347. Incredibly, the club was below .300 for the last six years of their existence in the 1940s.

Hinchliffe is a must-see for devotees of the Negro Leagues or baseball history. When rehabilitated, it will represent a monumental achievement although plans call for re-carpeting it with artificial turf.

Red Cap Stadium was home to the Jacksonville Red Caps in 1938 and the early 1940s. After multiple name changes, it still hosts amateur baseball eight decades later as part of the City of Jacksonville’s Recreation Department.

In order to be included in this list, a ballpark must have been the primary home park to a Major Negro League team for at least one season from 1920–1948. Also, a meaningful and representative portion of the historic structure from that period must have survived. Finally, the baseball field must remain, even if fallow or not maintained—or, gasp, covered in artificial turf.

Based on these criteria, only five former Major Negro League ballparks survive today. Three are hosting baseball games today and plans for restoring the other two are underway. All are listed on the National Register of Historic Places.

Aside from these five Fields of Dreams, portions remain of a few other former MNL ballparks that are worth noting and worth visiting.

Originally known as Perry Stadium, it was home to the Indianapolis ABCs in the early 1930s, the Indianapolis Clowns in the late 1930s and 1940s, the 1937 Indianapolis Athletics, and the 1940 Indianapolis Crawfords. Several Negro League clubs from other cities also used Perry as their home parks for a season or part of a season, including Cole’s (Chicago) American Giants and the Cleveland Buckeyes.

The exterior facade of the Bush Stadium grandstand was nicely rehabilitated in 2013 when the structure was converted into a residential complex called the Stadium Lofts. Unfortunately, though, the remainder of the grandstand was demolished and part of the infield was covered in concrete. A portion of the brick outfield wall also remains standing.

One of the two home fields for the Montgomery Grey Sox of the Negro Southern League in 1932, most of the historic structure was demolished during 2011 renovations. Now only a portion of the first base–side grandstand from the baseball park remains. Cramton Bowl was designed for football and the gridiron there remains in use today.

Regrettably, none of the structure of Stars Park remains, but the HBCU Harris-Stowe State University baseball team still plays on the site. Parts of the 1928 and 1930 NNL Championship Series were played here, and the storied St. Louis Stars also won the 1931 NNL pennant playing here.

Gary Gillette is the founder and chair of the Friends of Historic Hamtramck Stadium and former co-chair of SABR’s Ballparks Committee.