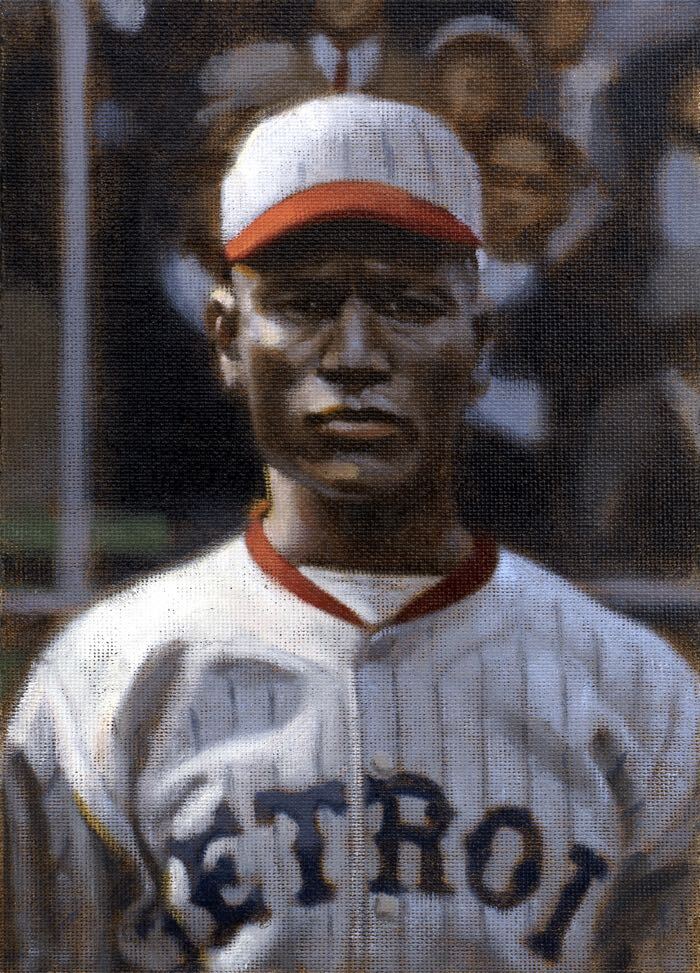 For most, actions speak louder than words, but in my family, home runs speak the loudest. It comes with the territory when your grandfather is Baseball Hall of Famer (and Detroit Stars legend), Norman “Turkey” Stearnes. My grandfather was a quiet and reserved man (originally from Tennessee) who could be found hitting baseballs so far they were rumored to have landed in “somebody’s kitchen,” making plays in center field that deserved to be on SportsCenter’s Top Ten, or discussing baseball on any given day, but he likely never imagined reaching Cooperstown (or four other Hall of Fames). Lack of imagination or self doubt were not issues for a man who batted over .300 in 14 of 19 seasons and captured six home run titles. Turkey stepped into the batter’s box confidently, even when facing aces on the mound like Satchel Paige. The elite talent pool of the Negro Leagues was undoubtedly competitive, but Jim Crow was unequivocally Turkey’s greatest opponent.

Even today, it remains apparent that an era dominated by segregationist laws, lynchings, and countless attempts to dehumanize Black Americans has had lasting effects. Over the past 100 years, tremendous ballplayers from the Negro Leagues have been hidden figures. Baseball enthusiasts and historians have celebrated and discussed the accomplishments of my grandfather and his peers, but Black ballplayers before Jackie Robinson have yet to become household names—and not for lack of talent. When the Negro Leagues dissolved (as a direct result of Major League Baseball capitalizing off of integration), the rich history and impressive statistics from that time were also cast aside.

Not having one bitter bone in his body, Turkey continued to follow baseball long after he retired. Living in Detroit, he was frequently in attendance to watch the hometown Tigers. Sitting in the bleachers at Tiger Stadium (watching a team he should have been able to play for), he always hoped to see a competitive game. If they were losing, he would return home early, but he continued to attend games up until his passing in 1979. Stepping in as the designated hitter, my grandmother, Nettie Stearnes, continued to follow the Tigers faithfully and she also wrote letters (for 21 years) to the Hall of Fame advocating for Turkey’s induction. In 2000, her vision became reality as she saw her husband inducted alongside another Detroit baseball legend, Sparky Anderson. Joining that class were Carlton Fisk, Tony Perez, and Bid McPhee.

With such an outstanding class of baseball legends, how is it that Turkey Stearnes and many other Negro Leaguers remain unknown? Quickly reviewing the year 2020 can provide us with more than enough answers to that question. With sports serving as an outlet for so many of us in need, both the pandemic and the racial crisis of 2020 caused society to endure the world’s longest rain delay. In a world filled with uncertainty, sports were on pause and society (especially America) was publicly grappling with the issue of race due to the social climate. As names like Ahmaud Arbery, Breonna Taylor, and George Floyd were thrust to the forefront due to the public nature of their horrific murders, sports fans saw their favorite athletes (and their respective organizations) using their platform to address social injustice. Sports icons of the past (such as Muhammad Ali, Tommie Smith, and John Carlos) were often referenced, LeBron James was no longer expected to “Shut up and dribble” and many who were previously in strong opposition to Colin Kaepernick suddenly were able to start seeing and acknowledging what has been a systemic problem for centuries. Making an effort to repair the harm done to the Negro Leagues, Major League Baseball decided to address a longstanding problem. In December 2020, they officially recognized over 3000 Negro League players as major leaguers within the historic records. In honor of economic justice and to ensure that their efforts were more than performative, it would also be appropriate to compensate the families of the Negro Leaguers who were grossly undervalued and underpaid.

I can honestly say my family and I are thrilled to see the progress that has been made thus far. We carry the legacy of my grandfather with us each day. Turkey’s daughters (my mother, Joyce Stearnes Thompson and my aunt, Rosilyn Stearnes-Brown) have spoken on behalf of Turkey for decades via interviews and at baseball events. They also have been routinely performing “The Star Spangled Banner” at Comerica Park during the weekend celebrations for the Negro Leagues—because in addition to being retired educators, they both have professional singing on their resume. Each time they have performed the anthem, I’ve always thought to myself, “What a sight for Grandpa Turkey to see from the heavenly bleachers, or more than likely, center field…”

These experiences (and so many more) have led me to this moment, where I’m reflecting upon how sports, history, and my grandfather are intertwined. My mind races with thoughts about the evolution of the Black athlete and what that means for me personally (as a former collegiate basketball player and currently as a coach and educator), for my family and truly for all of us globally, even beyond sports. Our perspectives and our collective understandings are constantly evolving. As we continue to grow as a society, sports and history will start to reflect that as well. The inclusion of players and statistics from the Negro Leagues in this day and age is simply an acknowledgment of the truth we have always known: The ballplayers who played in the Negro Leagues have always been worthy of the designation “major.” Using this truth as a metaphor for life, we have a chance to make this more than a historic correction. Perhaps baseball can be utilized to propel us into transforming society. Now that Major League Baseball has room for both Babe Ruth and Josh Gibson, for both Ty Cobb and Turkey Stearnes, perhaps baseball can be the gift that allows us all to see each other more deeply as humans. In essence, that would take us further than any home run and that would truly be “major”!

Vanessa Ivy Rose is an author, educator, storyteller, activist, basketball coach and creative from the metro Detroit area. In honor of her grandfather’s baseball legacy, Vanessa has been interviewed by various newspapers, podcasts and was featured on Fox Sports Detroit’s “Inside the Tigers: Stars Forever”. She also creates (and hosts) webinars and has spoken at several baseball conferences including the “Detroit Negro Leagues Baseball Centennial” and “Women in Baseball”.