Negro Leagues By The Numbers

by Bob Kendrick (with Joe Posnanski) 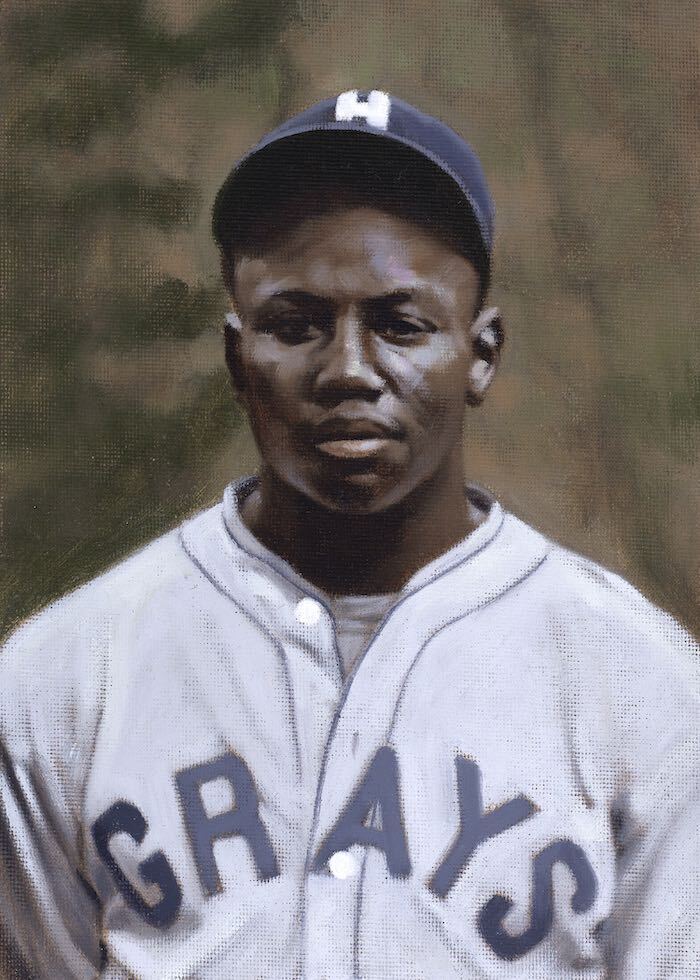 Josh Gibson hit home runs at a similar rate as Babe Ruth. Art by Graig Kreindler. Used with the permission of Jay Caldwell.

In 1994, a man named James A. Riley wrote an extraordinary book called “The Biographical Encyclopedia of the Negro Baseball Leagues.” The book is almost 1,000 pages of stories and facts about the men and women who played Negro Leagues Baseball. The research it took to put together such a masterpiece is mind-boggling; this was in the years before there was widespread study of the Leagues, before the beautiful Negro Leagues Baseball Museum on 18th and Vine in Kansas City was even built.

And the Encyclopedia has stats. Lots and lots of stats.

Now, we want you to take a look at the career Negro Leagues stats of those three legendary players that will appear here on this wonderful Baseball Reference site.

Obviously, these are significantly different — it’s a long way from Gibson’s 165 official home runs to his unofficial 962 home runs, right? It feels like the obvious question to ask: Where is the truth?

And the answer to that is there is more than one truth when it comes to the Negro Leagues. This is the story that the Negro Leagues Baseball Museum tells every day. Nothing at all is simple about a league that was built to combat and overcome hate and yet was so much about joy and a love of the game.

Nothing at all is simple about counting statistics for players who traveled from town to town, regularly playing a dozen or more games per week against town teams and factory teams, in tournaments and exhibitions, all in addition to their official Negro Leagues games. Satchel Paige surely did pitch in thousands of games. Josh Gibson surely did hit close to 1,000 home runs, Cool Papa Bell surely did steal at least as many bases as the great Josh hit homers.

And at the same time, the numbers that you will find here are the work of dedicated and meticulous researchers who painstakingly went through box score after box score to log the totals these players had when playing top level Negro Leagues baseball.

Each set of stats — the symbolic and the validated — offers insight into these amazing athletes when seen through the right context. For instance, look again at Gibson’s official stats. Those 165 home runs, at first glance, might not seem as impressive as the much larger number Riley and so many others have thrown out there.

But consider now that they came in 2,511 plate appearances against the very best the Negro Leagues had to offer.

Babe Ruth got 10,626 plate appearances in his career.

Over a similar length career, Gibson would have been projected to hit 700 home runs himself. And now consider how much more difficult conditions were for Gibson, how many more games he had to play, how much more he had to endure. And you can see why Barry Bonds, when he broke the home run record himself, said he still considered Gibson to be the all-time home run king.

Here at the museum, we are thrilled that MLB has finally acknowledged what we already knew to be true — that the Negro Leagues were indeed Major League. We are particularly happy that the numbers of these legendary players will become a part of the official record and, undoubtedly, people will become more curious about these players’ stories.

And that’s where we at the museum come in. These statistics offer an introduction to some of the greatest players in the history of the game — Oscar Charleston, Turkey Stearnes, the Devil Willie Wells, Bullet Rogan, Mule Suttles, Buck Leonard, the gloriously named Cristóbal Torriente, Leon Day, Hilton Smith, Martin Dihigo, Pop Lloyd and too many others to name. Go to their Baseball Reference pages and learn a bit about them. Then come to Kansas City and discover the extraordinary full story.

As our friend Buck O’Neil used to say, “We could play, man!”

Oh could they play.

Bob Kendrick is the President of the Negro Leagues Baseball Museum (NLBM) in Kansas City, Missouri. He is also the host of the Black Diamonds podcast on SiriusXM. Kendrick has been responsible for the creation of several signature museum educational programs and events, including Buck O’Neil’s Birthday Bash and the Hall of Game, which honors former MLB greats who played the game in the spirit and signature style of the Negro Leagues. Kendrick has been associated with the museum for nearly three decades, beginning as a volunteer during his 10-year newspaper career at the Kansas City Star. He was appointed to the museum’s Board of Directors in 1993, became its first Director of Marketing in 1998, and was named Vice President of Marketing in 2009 before accepting his current position as president in 2011.

Joe Posnanski is the #1 New York Times bestselling author of six books, including Paterno, The Secret of Golf, and The Baseball 100 (out September 28). He has written for The Athletic, Sports Illustrated, NBC Sports and The Kansas City Star. He has been named National Sportswriter of the Year by five different organizations and is the winner of two Emmy Awards. He lives in Charlotte, North Carolina, with his family.