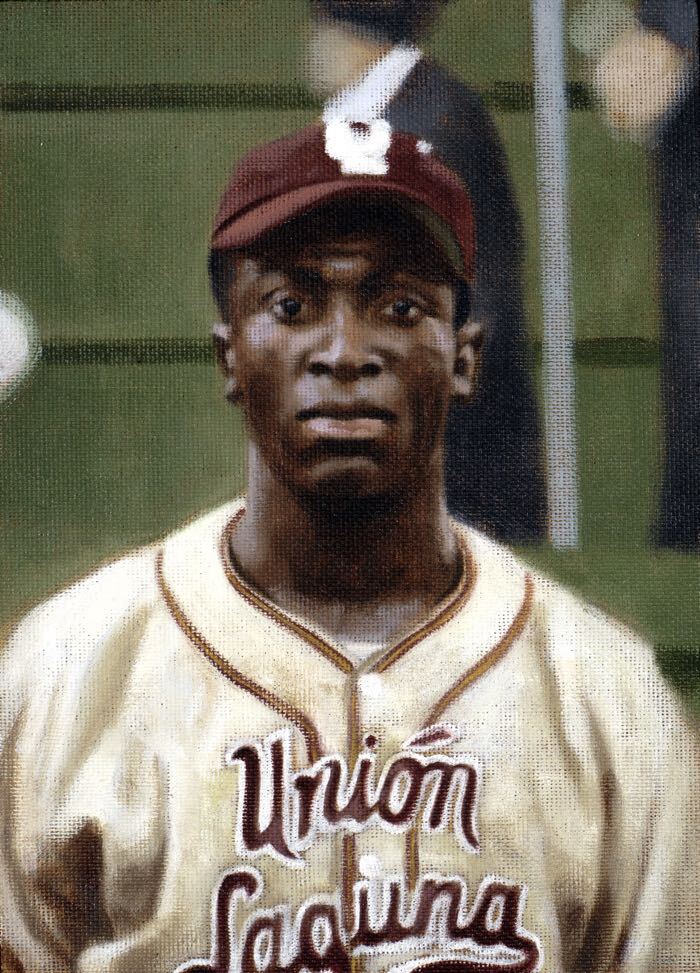 Cool Papa Bell has nearly 1,200 major leagues games in our database—the most for any player who exclusively appeared in the Negro Leagues. Art by Graig Kreindler. Used with the permission of Jay Caldwell.

As the founder and lead researcher of the Seamheads Negro Leagues Database, I’m thrilled and proud that our work has made its way to Baseball Reference, where players from the Negro Leagues will take their rightful place among the other major leaguers. Here are a few notes about the database, the nature of Negro Leagues statistics, and how we put the numbers together.

One thing you will find is that the statistics here show Negro League teams with fewer regular season games than the contemporary White major leagues, usually 50-100 compared to the standard 154 games in the National League and American League at the time. This is not because they actually played fewer games (in fact, as we’ll see below, much of the time they played more). It’s because Black baseball teams, in the days of segregation, played a more complex schedule than White major league teams, and league games formed only a part of their season—a very important part, but only a part.

There are two main reasons for this. First, home crowds for Negro League teams consisted mostly of Black fans, who were enthusiastic supporters but had limited disposable income. Second, throughout the United States there was a huge market for baseball outside of the organized major and minor leagues, and a large number of good semipro teams looking for opponents. This meant that Black team owners could maximize their profits by appealing both to their Black fanbase in their home city and to Black and White fans elsewhere, including those in smaller cities and towns with no league teams of their own, and also fans in larger cities who wanted cheaper, more accessible alternatives to league baseball.

Negro Leaguers played games against independent Black teams, interleague games against teams in the other Black major league, exhibition games against White major & minor leaguers, and many, many games against White semipro & amateur teams. Altogether a Negro League team might play as many as 150-200 games a year, with only a quarter to half being league games, depending on the season. The 1925 Hilldale Club, for example, played at least 177 games in total, but only 72 of them were Eastern Colored League games, and six more were in the World Series.

Our regular season Negro League statistics do not include games against White major or minor leaguers or semipros, or against teams we see as obviously lesser in quality. They do include league games, interleague games (there were usually two major Black leagues operating at any one time), and games against strong independent teams that we believe were comparable to league teams. Although Major League Baseball’s recognition of the Negro Leagues as major leagues covers only seven leagues that existed during the years from 1920 to 1948, a number of the most important Black professional teams during this period were independent teams (or in some cases associate members of leagues that did not compete for the pennant). The Homestead Grays and Kansas City Monarchs, possibly the two most famous Negro League teams of all time, operated for years as independents. The first three seasons of Josh Gibson’s professional career were spent on independent teams (the 1930-31 Grays and the 1932 Pittsburgh Crawfords).

Official statistics were sometimes published for various Negro Leagues, sometimes compiled by league officials, other times by professional statistical services. The records vary in quality and comprehensiveness, but all are (to one degree or another) incomplete, missing both players and statistical categories. The underlying documentation for these compilations no longer exists. Combined with the fact that box scores were not published for all games, this means that the official numbers can’t be checked or backed up with game-level records. Moreover, the official statistics do not include interleague games (which were very important parts of the Negro League schedule, especially in the 1940s) or games against the aforementioned independent teams of major league quality. 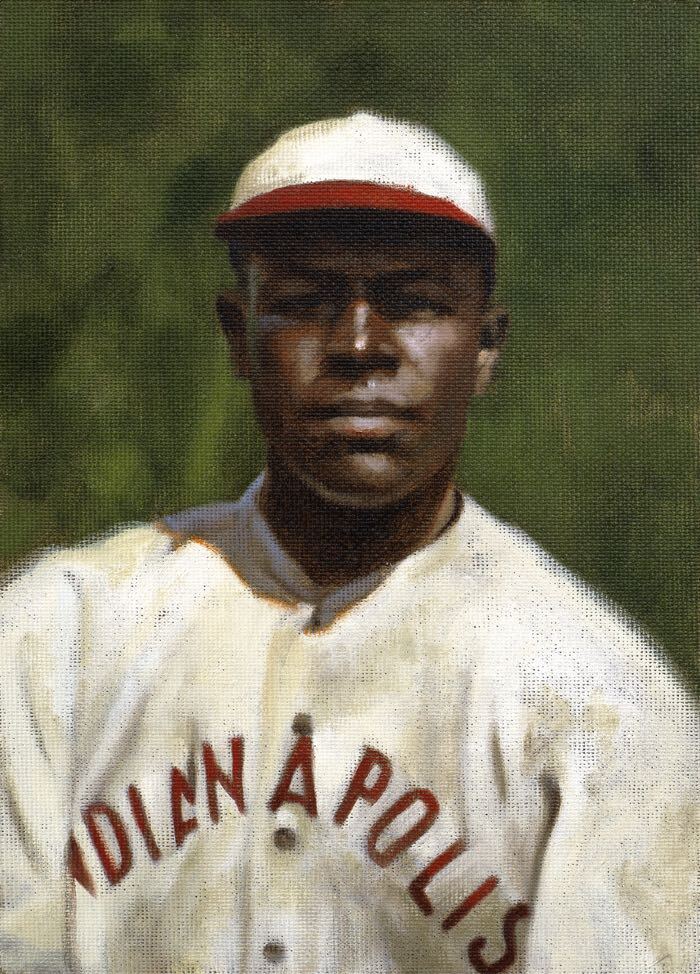 Ben Taylor played in 106 game for the Indianapolis ABCs in 1921—the most in a single Negro League season in our database. Art by Graig Kreindler. Used with the permission of Jay Caldwell.

Rather than relying on the limited official statistics that are available, we have set out to collect box scores and detailed game accounts for as many games as possible, along with the small number of scorebooks and filled-out scorecards that can be tracked down.

Our research process begins with the most important contemporary source for information on Negro League baseball, the Black press. During the 1920–1948 period, Black newspapers were weekly publications (the sole major exception being the Atlanta Daily World). Several of the most important—including the Chicago Defender and Pittsburgh Courier—were distributed nationally, and as such tried to cover the whole world of Black sports, not just baseball. Boxing, basketball, and college football got plenty of coverage as well, on what amounted to only two, or at best three, pages per week for all sports. In the 1920s and 1930s, the Defender, Courier, and other papers attempted to cover as many Negro League games as possible, cramming their pages with box scores. But there simply wasn’t enough space to fit them all in.

The Black sports pages provide us with a rough outline of a given season’s schedule, and supply box scores for a good portion of the games—as many as half in the 1920s. From there we go to mainstream daily newspapers located in league cities as well as neutral towns where Negro League games were played. In this era, and especially prior to World War II, newspapers tended to print large numbers of baseball box scores, well beyond the major and minor leagues. Although you usually need to consult Black newspapers if you want interviews, commentary, and context about the Negro Leagues, many White newspapers did print detailed and reliable box scores, many of which cannot be found in the Black press.

The task of collecting box scores is not a simple one. There was no centralized source for Negro League information that functioned the way The Sporting News did for White baseball. Neither is there currently one central depository for all the historical newspapers that need to be consulted for Negro League research. Even the Library of Congress is missing many necessary publications. Over the decades, thousands of hours have been spent at libraries all over the country spooling through reels of microfilm, searching for elusive box scores and game stories. Our burden has been somewhat eased in recent years with the rise of digitized online archives, but these are not comprehensive, and some vital newspapers have still not been digitized. We have also been able to add some material from the few scorebooks and filled-in scorecards that have survived.

Despite the efforts of our team and contributors, thousands of Negro League games still lack box scores or detailed accounts. The late 1930s and 1940s saw a general decline in the number of baseball box scores printed in newspapers (both Black and White), so coverage falls from close to 100% in the 1920s to 50% or less in the 1940s. Overall, for the 1920-1948 period, our individual player statistics cover 9,135 out of 12,608 known games between major Black professional teams, or 72.45%.

Can we expect major additions in the future? Will we ever get close to 100% coverage of Negro League games, 1920-1948? Unfortunately, the odds of anything like this being accomplished are probably close to zero. If we are lucky, we might expect to add 300–500 more games from newspaper sources. It’s always possible that previously unknown materials will emerge--perhaps one day someone will find a chest in an attic or a filing cabinet in a basement filled with long-lost league records or stacks of musty scoresheets. But we can’t count on such a development.

We can, however, look forward to concrete improvements to the Negro League record in the short term. Currently we still lack fielding statistics, complete pitching statistics, and some other secondary categories (hit by pitch, notably) for a number of seasons. These gaps will be addressed and filled in over the next couple of years. And another of our future goals is to work out ways to present the official statistics in tandem with our box score compilations, since whatever their failings, the official numbers do include games that aren’t currently part of our database.

In the long run, we would like to document as much of Black baseball history as possible, including the games against White semipros and amateurs that occupied such a large portion of Negro League schedules. But our emphasis for now will be on Black major league games.

Gary Ashwill is an author, researcher, and historian, primarily of Negro leagues and Latin American (especially Cuban) baseball. The Seamheads Negro Leagues Database that he co-founded was recently cited by Major League Baseball as being one of the contributing factors in their long overdue recognition of the segregated Black baseball circuits. A freelance editor residing in North Carolina, Ashwill has been writing the critically acclaimed outsider baseball blog Agate Type since 2006 and he was a contributor to the National Baseball Hall of Fame’s Negro League Researchers and Authors Group (NLRAG), as well as the Baseball Think Factory’s Hall of Merit.