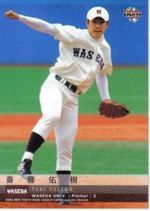 Yuuki Saitou (斎藤 佑樹, Saitou Yuuki) was the star pitcher for Sadaharu Oh's high school alma mater in 2006, helping the team win the Summer Koshien tournament by throwing 6 complete games, totaling 69 innings, 262 of 264 total batters and 948 pitches, including a two-day championship (the first in 37 years) which ended in a 1-1 tie after 15 innings the first day and winning 4-3 the next. Instead of opting for the NPB draft, he decided instead to go to college. He followed by leading his team to a victory in the Kokutai High School Baseball Tournamen, beating Masahiro Tanaka 1-0 in the finale.

He is also well known now for his blue hankerchief which he used whenever he was in a tight situation. In symbolism for his efforts in the Koshien tournament, all players of the Japan High School National Team were seen with one at their first practice, including his rival in the championship game, Masahiro Tanaka, of Komadai Tomakomai.

Unrelated, the same year, another pitcher with an identical name made his debut in NPB.

Saito's first collegiate loss would take place in the autumn session, going 6 innings, losing 2-1 to Hosei on September 23, 2007. However he would continue to add to his already legendary status as he pitched again versus Hosei on one day's rest, pitching a complete game, 137 pitch, 5-hitter. He finished the fall season with a 15-strikeout, 4-hit shutout of Keio University in the Tokyo Big Six University League title game. The 15 Ks were a record in the long rivalry between Keio and Waseda. He had a 0.78 ERA for the fall season and four wins, leading in both categories.

In the 2008 World University Championship, Saito went 1-0 with a 1.89 ERA for the Silver Medal-winning Japanese squad. In 19 innings, he struck out 18 and allowed 12 hits. He was second to teammate Shinji Iwata in innings pitched and was second to Stephen Strasburg in strikeouts. He had a big win over South Korea in the semifinals, going the distance and allowing only one run.

In November 2009, Saito became the 100th team captain in Waseda school history. In November 2010, four teams picked Saito in the first round of the draft, with the Nippon Ham Fighters winning bargaining rights; he was not the most popular college pitcher as Tatsuya Oishi was selected by six of the twelve teams.

Saito made his pro debut on April 17, 2011 as a starter against the Chiba Lotte Marines. He allowed six hits and four runs (one earned) while fanning two in a win. Masanori Hayashi relieved him.

With an overhand delivery Saito throws a fastball which tops out at 93 mph, slider, cutter, and a changeup.