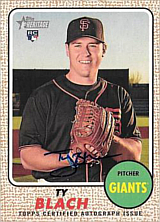 Pitcher Ty Blach reached the big leagues with the San Francisco Giants in 2016. He was drafted by the club in the 5th round of the 2012 amateur draft.

On June 2, 2017, Ty pitched his first career shutout, defeating the Philadelphia Phillies, 10-0. He also became the first pitcher in eight years to draw three walks in a game, Aaron Cook having been the last to do so back in 2009. Once again on August 3rd, he won a game with both his arm and his bat: facing the Oakland Athletics in an interleague game at AT&T Park, he pitched 8 innings and hit a three-run homer off Chris Smith in an 11-2 win. It was also his six straight start in which he had pitched at least six innings. He finished the year at 8-12, 4.78 in 34 games, of which 24 were starts. He had a very low strikeout rate, however, with just 73 in 163 2/3 innings. In 2018, he was unexpectedly thrust into the role of Opening Day starter for the Giants because ace Madison Bumgarner was injured. Ty had the unenviable task of facing the Los Angeles Dodgers and ace Clayton Kershaw on March 29th. But he rose to the challenge, delivering 5 scoreless innings and finished a winner thanks to a solo homer by Joe Panik as San Francisco eked out a 1-0 win. He once again struggled to miss bats, punching out just 75 batters in 118 2/3 big league innings. He spent most of 2019 in the minors and was designated for assignment on July 27th, claimed by the moribund Baltimore Orioles. He was DFAed again in September and outrighted off the 40 man roster.

Blach is a natural right-hander, but apparently began throwing lefty as a very young boy at the behest of a family friend who taught him to throw left-handed because he knew lefties were a prized commodity in baseball. This was long before there was any thought of Blach becoming a star athlete, but the crazy idea did work out, and by the time Blach reached high school, he was a top-ranked athlete.