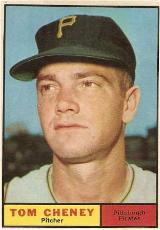 “I didn’t like how my baseball career ended, particularly because I was so young. I won only 19 games total. But I realized how fortunate I was to have made it to the majors. Not many make it. And how many guys who played for many years didn’t get to play in the World Series or win a title? I also cherished the togetherness of players in an era when we didn’t make enough money for money to matter. So I got about as much out of the game as a person could ask for.” - Tom Cheney, to Danny Peary, We Played The Game 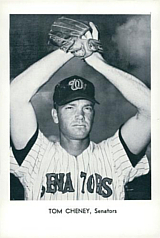 Tom Cheney is remembered best for a tremendous one game performance: on September 12, 1962, he struck out 21 batters in an extra-inning game, a record that has stood since. He accomplished the feat in 16 innings pitching for the Washington Senators. But he had 10 seasons of pitching to do before he arrived at his magic moment.

Tom signed with the St. Louis Cardinals before the 1952 season. He debuted with the Albany Cardinals of the Class D Georgia-Florida League, appearing in one game, a loss. He was with the same team in 1953 and went 9-12 with a 4.29 ERA. He earned his keep in the minors until he put two good years together with the Omaha Cardinals in 1956 and 1957. Cheney opened the 1957 season with St. Louis, making one relief appearance and starting three games, but was optioned back to Omaha within the first month of the season after being plagued by wildness. In his four games, he was 0-1 with 15 walks in a total of 9 innings. Cheney had a fine season with Omaha in 1957 before missing the 1958 season due to service in the United States Army. He spent the 1959 season primarily with Omaha but also appeared in 11 games with the Cards. Still plagued by wildness, Cheney was 0-1 with a 6.94 ERA for the big club, with 11 walks in 12 innings.

The Cardinals traded Cheney, along with Gino Cimoli, to the Pittsburgh Pirates on December 21, 1959, for pitcher Ron Kline. Cheney opened the 1960 season with the AAA Columbus Jets, where he went 4-8 with a 3.16 ERA and with 47 walks and 115 strikeouts in 111 innings. He was promoted to the Pirates on June 27th. Wildness remained a problem, as he walked 33 batters in 52 innings, but he compiled a record of 2-2 with an ERA of 3.98 in 11 appearances. He pitched a complete game shutout on July 17, four-hitting the Cincinnati Reds at Forbes Field. That game also marked the first start of the season for Pirates' third-string catcher Bob Oldis, who would be the starting catcher for three of Cheney's eight starts. In the 1960 World Series against the New York Yankees, Cheney appeared in each of the three games won by the Yankees, as the Pirates were blown away each time and had to dig deep into their bullpen. Tom pitched four innings and fanned six Bronx Bombers. He gave up a run in one inning in Game 2 and again in Game 6. But in Game 3, he pitched two scoreless innings, giving up only one hit, no walks, and striking out Elston Howard, Whitey Ford and Mickey Mantle.

Cheney opened the season with the Pirates in 1961 but appeared in only one game, giving up a home run and four walks in one inning without retiring a batter. He was optioned back to Columbus before being traded to the Washington Senators for Tom Sturdivant on June 29th. The manager of the Senators was Mickey Vernon, who had been a coach with Pittsburgh in 1960. Cheney joined former part-time 1960 Pirates Bennie Daniels, Harry Bright and R.C. Stevens on the expansion team's roster. With Washington in 1961, he was 1-3 in 10 appearances. The Senators finished last in the American League with a 61-100 record. In 1962, the Senators finished last again, at 60-101. Cheney finished the season at 7-9 with a 4.38 ERA.

On September 12th, Tom etched his name deep into the annals of baseball history. Just before he took the mound against the Baltimore Orioles at Memorial Stadium, Senators pitching coach George Susce saw something he liked in his warm-up tosses. "Kid," he said as Cheney began to walk toward the field, "if you don't pitch a no-hitter tonight, it'll be your own fault." Cheney did not pitch a no-hitter. Instead he set a record that has never been matched, striking out 21 batters in a 16-inning game witnessed by 3,098 fans. He never got much publicity for his marathon effort, perhaps because it was an extra-inning affair. But consider this: 42 pitchers have hurled at least 18 innings in a game and only eight have reached double figures in strikeouts. Tom had 13 strikeouts after nine innings. In the top of the 16th, Bud Zipfel homered to put Washington ahead, 2-1. In the bottom of the inning, Cheney fanned Dick Williams to end the game for his 228th pitch and 21st strikeout.

Since his trade to Washington in 1961, Tom had won 15 games over two years, including seven shutouts. Late in the 1963 season, Tom was 8-9 with a 2.71 ERA when he suffered a career-killing arm injury and was sidelined, ironically, in a game against the Orioles. Again the Senators finished at the bottom of the ladder with a 56-106 record, 48 1/2 games back of the Yankees. Tom pitched in pain the following year, 1964, going 1-3 for the Senators. He entered the Mayo Clinic in search of help and did not pitch in the majors in 1965, but his tank was empty after appearing in three games in 1966, leaving the game with a 19-29 big league record and 3.77 ERA.