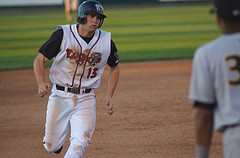 Scott Campbell was the first person born and raised in New Zealand to be picked in the MLB amateur draft. His brother Aaron Campbell was one of the first Kiwis to play college baseball in the USA.

Campbell played soccer in high school as there was no baseball program. He came to the US for college and hit .423 in junior college in 2004. Baseball America named him as a junior college first-team All-American infielder. Scott transferred to Gonzaga for 2005 and batted .332/.462/.403 to lead the team in average. He was the All-West Coast Conference pick at second base. In 2006, the junior hit .389/.488/.488 and was second in the WCC in average behind Daniel Nava. Campbell was left off the All-Conference team despite his fine average and OBP. He made history when he was chosen by the Toronto Blue Jays in the 10th round of the 2006 amateur draft, the first Kiwi born and raised in New Zealand to be picked in the history of the draft. He was signed by scout Brandon Mozley and made his pro debut that summer.

Campbell hit .292/.397/.350 in his pro debut with the Auburn Doubledays. While he got on base very well, he did not steal effectively (2 for 12 on the basepaths) and had no hits longer than a double. He also hit just .208 against southpaws. He led New York-Penn League second basemen in assists (203) and double plays (37) as well as errors (12). He was third in the NYPL in OBP and played in the mid-season All-Star game.

Scott moved up to the Lansing Lugnuts in 2007, producing at a .279/.390/.397 clip. He continued to get on base well and showed some increased pop (7 home runs). He led Midwest League second basemen with a .979 fielding percentage and his OBP was only 16 points shy of the MWl lead.

Campbell bypassed high-A ball and went to AA in 2008. After 29 games, he was hitting a strong .354/.407/.478 for the New Hampshire Fisher Cats. He was chosen for the 2008 Futures Game and hit 6th as the World team DH. In his first at-bat, he lined out against Trevor Cahill. In the 4th, he grounded out against Jess Todd. Facing Ryan Mattheus in the 7th, he hit into a force and scored on Che-Hsuan Lin's homer. He ground out against Kevin Pucetas in the 9th inning.

Campbell played for the New Zealand national team in the 2013 World Baseball Classic Qualifiers in Taiwan in November 2012, where he batted .583 (tops among all hitters with at least 8 AB in one of the four qualifying tournaments) and played a flawless SS in leading the underdog Kiwis to the championship game, where they fell to host Taiwan. He was back in the 2017 World Baseball Classic Qualifiers, going 2 for 10 with a double, walk and RBI while starting at short.