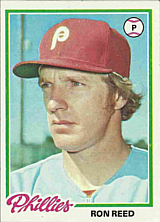 Ron Reed pitched a two-hitter on May 19, 1968 as a member of the Atlanta Braves against the New York Mets. He gave up singles to Art Shamsky and Jerry Martin. He gave up 2 earned runs, walked 5 and struck out 5. The Braves won 3-2. Nolan Ryan was the losing pitcher.

Prior to his success on the diamond, Ron was a 3rd round draft pick of the Detroit Pistons, playing two seasons for them from 1965 to 1967. His coach was fellow NBA/MLB dual threat Dave DeBusschere.

He was inducted into the Indiana Baseball Hall of Fame in 1990. His first baseball card appearance was in the 1968 Topps series.