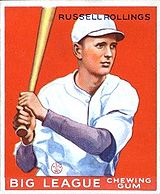 Infielder Red Rollings had played a total of 17 games with the Mobile Bears when he was drafted by the Boston Red Sox on October 1, 1926 from the Southern Association team in the 1926 Rule V Draft. He debuted with the Boston Red Sox on April 17, 1927 and spent the entire year with Boston club, appearing in 82 games and hitting at a .266 average. The Red Sox would use him sparingly in 1928 and he appeared in only 50 games, getting 57 plate appearances and hitting at a .229 clip before he was sent to the Fort Worth Panthers of the Texas League where he finished out the season, appearing in 40 games, and hitting .337. 1929 would find him with the Hollywood Stars of the Pacific Coast League where he played in 198 games, finally hit his first home run in professional ball, and carried a .324 average for the year.

His solid performance in Hollywood got him drafted by the National League's Boston Braves on October 7, 1929 in the 1929 Rule V Draft. Red would spend the entire 1930 season with the Beantowners, appear in 52 games and hit at a .236 average. It was probably not known at the time but this was the end of Red's major league career and he finished up his three season run in 184 games and a career .251 hitting average. For reasons unknown at this time, Red was purchased by the St. Louis Cardinals on October 23, 1930. The Cardinals had Red with the Houston Buffaloes, Columbus Senators and the Rochester Red Wings in 1931 where altogether he hit .275 with 4 homers, but never got a chance to unpack his suitcase.

Red would wind up in the Western League in 1932 with the Denver Bears, play well, hitting .347 with nine homers while appearing in 147 games and for the second time in his minor league career he went over 200 base hits. Also, Red had the same address all summer. His motor was still hot in 1933, playing 137 games for the Atlanta Crackers of the Southern Association and hitting .324, plus he handled the hot corner at a .948 percentage. Red had a decent year in 1934 with the Tulsa Oilers and the Kansas City Blues, where he hit .307 but appeared in just 77 games. Red hit .329 with 6 homers in 1935 with Louisville and Kansas City and this was probably his last year against top-flight competition. In 1936 Rollings appeared in just 68 games with Louisville and hit .268 and in 1937 he was in 40 games with Louisville and the Reidsville Luckies, hitting .281.

It was only 1938 and Red was only 34 and as most players want to do Red took up player-managing. Red got his opportunity and was with four different teams in four different leagues, with a fourth place finish being his best in the East Texas League in 1938.