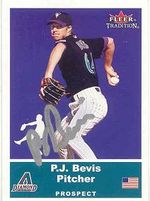 In the International Baseball League of Australia in 2000-2001, he was 3-1 with a save, 1.54 ERA and .205 opponent average. He was 5th in the IBLA in both ERA and opponent average. He posted a 1.47 ERA with 14 saves, 41 strikeouts and only 20 hits allowed in 30 2/3 innings between the Yakima Bears and El Paso Diablos in 2001. He was third in the Northwest League with eight saves and tied Jesus Silva for second in the Diamondbacks farm chain in saves, two behind Greg Belson. In the 2001 Baseball World Cup, he allowed two runs in three innings for the Australian national team but did notch one save.

He started 2002 in Arizona's system, but was traded to the New York Mets in August as the player to be named later in a deal that sent outfielder Mark Little to Arizona. He wrapped up the season with the Binghamton Mets and went 5-5 with 11 saves and a 9.7 K/9 IP ratio in 53 games altogether (49 for El Paso, 4 for Binghamton). He tied Luke Anderson for 7th in the Texas League in saves and was 5th among Arizona minor leaguers (between Duaner Sanchez and Brian Bruney). He tied José Valverde for sixth in the Arizona chain in games pitched.

In the 2003 Claxton Shield, Bevis struck out eight and allowed two hits and no runs in 7 1/3 IP for the Queensland Rams, saving two games. He led the event in saves and tied for 4th in strikeouts, saving both the semifinal game and the finale as the Rams won it all. He was named finals MVP. In the summer of 2003, his ERA rose to 3.74, though he struck out 108 batters and allowed just 57 hits in 79 1/3 innings. In his first taste of Triple-A that year, he did not allow a run in 8 1/3 innings for the Norfolk Tides (the rest of the summer had been with Binghamton). He was second in the Mets chain in games pitched (50, trailing only Pete Zamora) and he was 4th in strikeouts despite being solely a reliever (he trailed Scott Kazmir, Lenny DiNardo and Kevin Deaton). He had a 3.38 ERA for the Rams in the 2004 Claxton Shield. He was a late withdrawal from the Australian squad that won Silver at the 2004 Olympics.

Saving 14 games in 2004 (1-2, 12 Sv, 3.06 in 27 G for Binghamton, 1-2, 2 Sv, 5.06 in 22 G for Norfolk), he tied Celso Rondon for the most games pitched by a Mets farmhand and was third in saves (two behind Heath Bell and Jose Parra). He joined the Colorado Rockies system in 2005 and had 21 saves despite posting a 6.86 ERA in 54 games. Those numbers are somewhat deceptive as his 21 saves were with the Tulsa Drillers, for whom he had a 4.26 ERA (albeit an 0-5 record) while his ERA was inflated by his 13 outings for the Colorado Springs Sky Sox (2-1, 11.57), for whom he did not get a save. He led the Texas League in saves (two over Cory Doyne and Alex Santos). He was again third in a farm system in saves, this time trailing Jim Miller and Scott Beerer. Only Miller pitched more games among Rockies minor leaguers that year.