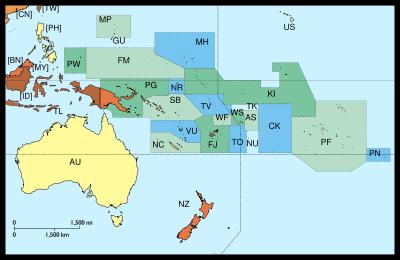 Oceania (sometimes Oceanica) is a geographical, often geopolitical, region consisting of numerous lands—mostly islands and usually including Australia — in the Pacific Ocean and vicinity.

Baseball is well established in Australia, which has its own domestic league, and is gaining popularity in New Zealand, which has taken part in the World Baseball Classic qualifiers. In addition, the American territories of Guam and American Samoa also have a local baseball tradition and both have produced a major league player. Hawaii, which is geographically part of Oceania but politically in North America is another regional baseball stronghold.