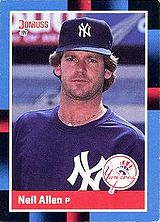 Neil Allen first came up to the major leagues as a starting pitcher with the New York Mets in 1979, but was quickly moved to the bullpen and found success, saving 22 games in 1980 and 18 and 19 games in 1981 and 1982 respectively. Despite the saves, his other statistics were only so-so - the Mets were a last-place team in those years - and in 1983, he returned to starting after being traded to the St. Louis Cardinals in return for All-Star first baseman Keith Hernandez, whom the Cards wanted to get rid of because he was considered a bad clubhouse influence. Allen did well over the last two-thirds of that year, with a record of 10-6, 3.70.

But Neil preferred being a reliever and he returned to the role for most of the rest of his career, even though he had some success in a starting role for the Chicago White Sox in 1986, when he was 7-2, 3.82. He pitched a couple of seasons with the New York Yankees and finished his big league career with the Cleveland Indians in 1989. Bill James commented that Allen was one of the first pitchers to find relieving more appealing than starting, as in previous decades, all the good pitchers wanted to be starters, but Allen wanted the opposite, even though his stuff was more suited to starting. James explained that Allen was one of the Mets' biggest stars as the team's closer in his first few seasons and always wanted to recapture that moment.

He threw a two-hitter on July 20, 1986, as a member of the White Sox against the New York Yankees. He did not walk or strike out anyone in the game. The two hits were a double by Rickey Henderson and a single by Dave Winfield. This was the only two-hit shutout with no walks and no strikeouts since at least 1957. Rudy May had a similar game in 1977 but it was not a shutout. He also threw a shutout on May 31, 1988, without pitching a complete game, the second pitcher to do so after Ernie Shore's nearly perfect game in relief of Babe Ruth in 1917. According to rule 10.19 (f), a pitcher is credited with a shutout even if he does not pitch a complete game as long as "he enters the game with none out before the opposing team has scored in the first inning, puts out the side without a run scoring and pitches all the rest of the game."

Since retiring as a player, Allen spent nearly two decades as a pitching coach. He coached in the Toronto Blue Jays system from 1996-1999 and the New York Yankees chain from 2000 to 2006. He was also the Yankees' bullpen coach in 2005. After working with affiliates of the Tampa Bay Rays from 2007 to 2014, he returned to the major leagues in 2015 as pitching coach of the Minnesota Twins. On May 26, 2016, he was suspended from his coaching duties after having been arrested for driving under the influence. Eric Rasmussen, the minor league pitching coordinator, replaced him on an interim basis. He rejoined the Twins on July 7th. In 2017 the Twins reached the postseason, but it was in spite of the performance of their pitching staff, not because of it. He was dismissed at the end of the year and replaced by Garvin Alston.

In addition, Allen served as pitching coach for the Leones del Caracas of the Venezuelan Winter League during the 2010/2011 season.