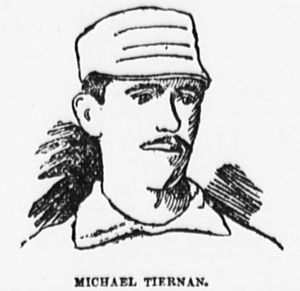 "In the early days of the Giants the name of Mike Tiernan was on the lips of every baseball fan, and to this day the old-timers talk about the long drives which Silent Mike used to make in Harlem." - from Mike Tiernan's obituary in the New York Times

Tiernan began playing professionally in New Jersey in 1884. He attracted attention from the New York managers playing with the Jersey Cities in 1886, signing with New York in 1887. See [1]

Playing his whole major league career with the New York Giants, he was an outfielder who also pitched five games when he was a rookie. He led the National League in OPS+ in 1890 and 1891 with scores around 160, and had other years where his OPS+ was almost as high. He was a member of two editions of the Giants that won early versions of the World Series, in 1888 and 1889. He worked one National League game as an umpire in 1895.

He died in 1918 after a long illness. His New York Times obituary called him a "Famous Slugger" and a "Great Baseball Hero".