Note: This page discusses 1980s pitcher Miguel García. For others of the same name, click here. 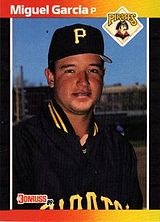 Pitcher Miguel Garcia was signed by the California Angels in 1984 and reached the majors as a 20-year-old in 1987, appearing in one game for California early in the season. That September, he was dealt to the Pittsburgh Pirates as a player to be named later in the trade for Johnny Ray. He made a handful of appearances with the Pirates through 1989.

Following his playing days, Garcia was a Florida Marlins scout from 1997 to 2001. He then spent four years as the Boston Red Sox coordinator of Latin American scouting and joined the Detroit Tigers in the same capacity in 2005. As of 2013 he was the Tigers' Director of Latin American Operations.