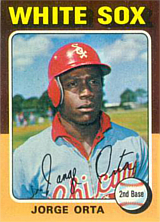 The son of Cuban third baseman Pedro Orta, Jorge Orta made his professional debut at the age of 17 with the Fresnillo Mineros of the Mexican Center League, batting .265 in 20 games. With the Puerto Mexico Charros of the Mexican Southeast League in 1970 he batted .302 in limited time. The next year, 1971, Jorge became a regular performer for the Tuneros de San Luis Potosi in the Mexican Center League. While he fielded just .937 at second, he lit up the plate. The 20-year-old hit .423/~.527/.709 and led the league in average by 52 points. He also had the most triples (7) and stole 13 bases in 13 tries for the Jalisco Charros farm club.

The Chicago White Sox were duly impressed and signed Orta, assigning him to the Knoxville Smokies. He hit .316/~.399/.526 in 53 games for Knoxville in 1972 and was in the majors much of the year. He never returned to the minors after that season. Orta was third in the American League in triples in 1973, second in average in 1974, 8th in average and third in triples in 1975 as an All-Star. He posted an OPS+ over 100 throughout the 1970s, very good for a second baseman. He originally came to the majors during Dick Allen's MVP year, and was a member of the White Sox during a turbulent period of Allen's career with the Sox.

Orta was not nearly as productive in the 1980s, finishing among the league leaders just once (10th in triples with the Kansas City Royals in 1984) and making one more All-Star team, with the Cleveland Indians in 1980. He did enjoy a 6 hit game with the Indians in 1980, going 6-for-6 against the Minnesota Twins on June 15. He moved to outfield and DH due to his poor glove at second (Bill James ranks him as the worst defensive player among the 250 most-used 2B in history) and his OPS+ was under 100 all but once after 1980, as he declined fairly rapidly. Despite poor performances in the 1980s, Orta's career OPS+ was 108.

In the 1985 World Series Orta was the beneficiary of a controversial call by umpire Don Denkinger in Game 6, who called him safe on a grounder to first baseman Jack Clark that pitcher Todd Worrell raced to first to handle the throw. Instant replay showed Worrell beat him to the bag in catching the throw. The call helped Orta's Kansas City Royals rally to win, icing their first World Series victory one night later.

Orta was voted into the Salon de la Fama in 1996