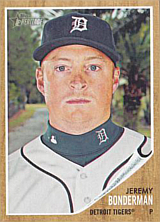 "If he stays healthy, he's going to be one of the best ever." - Rondell White

Jeremy Bonderman was the first Detroit Tigers player in 35 years to make the jump from A ball to the majors when he made his Major League debut in 2003. He threw his first shutout on August 23, 2004 against the Chicago White Sox, striking out 14 batters. In 2005, he suffered through a bout of elbow soreness, but he came back strong in 2006, going 14-8, 4.08, with 202 strikeouts in 214 innings as the Tigers reached the World Series. He also won a game in the Division Series by giving up only 2 runs in 8 1/3 innings against the New York Yankees.

Unfortunately, he was unable to stay healthy. Bonderman developed a blood clot due to thoracic outlet compression syndrome in 2008 and underwent an operation that required the removal of a rib. When he returned to action in 2010 after pitching only 9 times in 2009, he was not the same pitcher, going only 9-10, 5.53 in 30 games. He was let go after the season. Attempting a comeback with the Cleveland Indians in 2012, he discovered in spring training that he had a torn ligament in his pitching elbow and underwent Tommy John surgery. He attempted another comeback in 2013, this time with the Seattle Mariners, and made it back to the majors on June 2nd, when he lost a start against the Minnesota Twins, 10-0. He redeemed himself in his next start against the Yankees on June 7th, when he won his first game since 2010, 4-1. He gave up a 1st-inning run, but nothing else over the next five frames. He was designated for assignment in July and returned to Detroit in August, finishing his career that September.

Before coming to the majors, he had gone 2-0 with a 3.07 ERA for the US team that finished 2nd in the 2000 World Junior Championship, winning All-Star RHP honors.