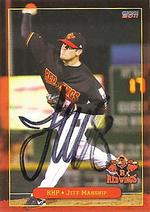 Jeff Manship was a top high school prospect who battled injuries in college. He has recovered and led the Big East Conference in strikeouts in 2006 and the Minnesota Twins organization in strikeouts in 2007. He made his major league debut with the Twins in 2009.

High school and US youth and junior team career[edit]

Manship was part of his high school's first baseball team, in 2001. He helped the US win Gold at the 2001 World Youth Championship, going 1-0 with 8 strikeouts, 2 walks and no hits or runs allowed in 3 innings. In 2002, Jeff went 9-1 as a junior in high school. He threw three no-hitters that year, including a perfect game in which he struck out 19. In 2003, he had a huge year, going 13-2 with a 0.58 ERA. He struck out 146 in 85 innings, walking only 18 and allowing just 40 hits. Baseball America named him a first-team All-American, joining Jeff Allison, Wade LeBlanc and Adam Miller and two others on the first team pitching staff. In the 2003 Junior Pan American Cup, he was 1-0 with a 0.84 ERA, striking out 20 in 10 2/3 IP and allowing 6 hits and 5 walks. He whiffed 15 in 7 innings against Curacao. He was second on the US junior team in strikeouts in that competition. The Arizona Diamondbacks took him in the 50th round of the 2003 amateur draft due to his strong college commitment.

Baseball America rated Manship the #3 freshman pitcher entering 2004 behind Andrew Miller and Ian Kennedy. Unfortunately, before his college career began, he needed Tommy John surgery and missed all of his freshman campaign. As a sophomore, he was 2-1 with a save and a 3.97 ERA before a finger injury caused him to miss much of the season. He pitched in the Cape Cod League for the Cotuit Kettlers, going 3-3 with a 2.85 ERA.

Manship was healthy as a junior and was 9-2 with a 3.26 ERA and 111 strikeouts in 94 innings, allowing 76 hits and 28 walks. He was 4th in the Big East Conference in ERA, tied for the Conference lead in wins with Nick Tucci and led in strikeouts. He made the All-Conference team as one of four pitchers chosen and was named the COnference Pitcher of the Year, beating out Kevin Mulvey among others.

Perhaps due to his injury history, Manship fell to the 14th round of the 2006 amateur draft before he was selected by the Minnesota Twins. He was signed by scout Billy Milos and began his pro career that summer.

Manship debuted professionally with the GCL Twins and struck out 10 in 5 2/3 scoreless innings before being promoted to the Fort Myers Miracle. He struck out 12 in 8 2/3 innings for Fort Myers, allowing three runs (two earned).

Manship led Twins farmhands in strikeouts in 2007 (edging out Brian Duensing) and tied Duensing for the win lead. He tied for 9th in the affiliated minors in wins. Manship made the Midwest League post-season All-Star team as the top right-handed hurler despite having spent just half a season there; had he qualified, he would have easily led the MWL in ERA. Baseball America named him the #13 prospect in the MWL, between Omar Poveda and John Whittleman. Manship also would have been in the top 10 in the Florida State League in ERA (6th) had he qualified in terms of innings pitched.

Manship joined the Colorado Rockies in 2013, but the results were more of the same: 11 games pitched with a record of 0-5 and an ERA of 7.04. With the Philadelphia Phillies in 2014, he was 1-2, 6.65 in 20 games, the highest number of appearances he had made at the major league level up to that point. Things finally turned around for him with the Cleveland Indians in 2015 and 2016, when he made 32 and 53 appearances respectively, with ERAs of 0.92 and 3.12. While he was not a front-line reliever, he was finally a useful cog on a winning team. He was with the Indians in their run to Game 7 of the 2016 World Series, making 3 appearances, including two in the World Series against the Chicago Cubs, and not giving up any runs in 2 1/3 innings. He seemed to have finally found a place in the majors at age 31, but he made a move overseas the next year.

He spent the 2017 season in the Korea Baseball Organization, and went 12-4, 3.67 with the NC Dinos, moving back to starting after having been exclusively a reliever the previous two seasons. He tied for 7th in the 2017 KBO in wins and would have been 8th in ERA had he qualified. On the strength of that solid year, he signed a minor league contract with the Cincinnati Reds in February, 2018, but the contract was voided a few days later when he failed a physical examination.