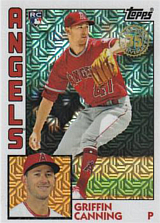 Griffin Canning made his major league debut with a start for the Los Angeles Angels against the Toronto Blue Jays on April 30, 2019. He gave up 3 runs in 4 1/3 innings, striking out 6, and was not involved in the decision. Griffin had just 28 games of minor league experience at the time, having been a 2nd round pick by the Angels in 2017, out of UCLA, not making his professional debut until the following year. He was 1-0, 1.56 in 3 starts for the AAA Salt Lake Bees at the time of his call up and finished 5-6, 4.58 with 96 strikeouts in 18 games (90 1/3 innings) in the bigs.

On June 23, 2021, he was forced to play left field for the Angels through an unusual set of circumstances. Playing the San Francisco Giants at home, the Angels had elected to have P Shohei Ohtani bat for himself, a defensible decision given he was tied for the major league lead in homers at the time. But after he left the game after pitching six innings, they had to use a couple of pinch-hitters when his turn to bat came up, leaving their bench short as the game headed into extra innings. In spite of the tiebreaker rule being in place, the game kept going, and disaster struck when C Kurt Suzuki had to leave with an injury in the top of the 12th inning after taking a foul tip off his mask. Manager Joe Maddon got creative, moving LF Taylor Ward, who had not caught professionally since 2017, to catch, and sending Canning to play left. Maddon had no one left on the bench and figured Canning was the most athletic of the remaining pitchers. He did lay a successful sacrifice bunt when his turn to bat came up in the bottom of the 12th, but Juan Lagares was later thrown out at home and the game continued into the 13th, when the Giants exploded for 7 runs to put the game away.