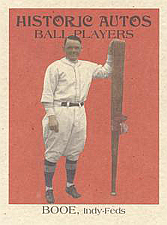 Everett Booe played minor league ball from 1910 to 1930, seeing the majority of his big league time in the short-lived Federal League. He had 2,034 hits and 345 stolen bases to go with his .297 average. The final "e" on his name was silent, leading to endless merriment when he was announced into a ball game. Booe played second base for the St. Paul Saints in a smattering of contests during the 1916 season, appearing in the American Association season opener at Indianapolis against the Indians on April 18th. In two at-bats, Booe contributed two sacrifices; in the field he was credited with two putouts, and five assists. Following his playing days, Booe was one of the first managers in the St. Louis Cardinals' budding farm system.