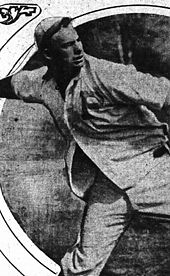 Elmer Leonard was at Saint Mary's College of California at the same time as Seattle Bill James. Leonard came out of St. Mary's in 1911, and made his major league debut on June 22 for the Philadelphia Athletics, a team that went on to win the 1911 World Series.

In 19 innings, he had an ERA of 2.84 and a record of 2-2. His ERA was better than the team ERA of 3.01 and the league ERA of 3.34. However, there are reasons why manager Connie Mack may have chosen not to keep him. First, he gave up 26 hits, and it was common then for pitchers to give up fewer than one hit per inning. Second, he gave up almost as many unearned runs as he did earned runs, and that was more than usual.

As a hitter, he had a .286 batting average on a team that hit .296. Fellow pitchers on the A's staff included future Hall of Famers Eddie Plank and Chief Bender.