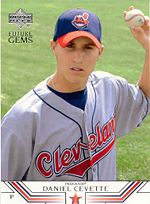 Dan Cevette is the son of Jeff and Kelley Cevette. He has a brother named Justin. The family name is pronounced "Sah-VEET".[1]

Cevette's uncle, Bruce Hackett, was inducted in the Tioga County Sports Hall of Fame in 2005. Hackett has had an extensive coaching and playing career and was a member of the Chico Heat of the independent Western Baseball League.

There is some contemporary evidence that Dan's grandfather, Brad Hackett, was assigned to the Johnson City Phillies in 1960.[2][3]

Cevette began playing in organized baseball leagues at the age of 5 with the Elkand Pee Wee League team. Throughout his youth, he played in a variety of leagues including Little League Baseball, Babe Ruth League, American Legion Baseball, Keystone State Games, and adult amateur leagues. In 1999 and 2000, Dan was a member of the Elkland Senior Little League Team.

Dan Cevette played three seasons for Elkland Area High School in Elkland, PA. While there, he compiled a 16-3 record with 3 saves. The school is in the Northern Tier League which is divided into West and East divisions. Dan was a NTL West Baseball All-Star all three seasons that he played. In January of 2003, his high school retired Dan's number (#32).

In his junior year, Cevette went 5-2 on the mound and hit .348 with 4 home runs and 15 RBI at the plate. Dan was picked as the NTL West pitching MVP. He was also named as a 3rd Team All-American by The Baseball Factory.

In the summer of 2001, Cevette played for the Olean Lumberkings in the adult amateur Alle-Catte and Buffalo News Central League. One of his teammates was another Pennsylvania native, Matt Knox, who was also signed by the Indians.

In 2002, Cevette finished up his high school career by going 5-0 with two no-hitters and a 0.40 ERA. In his second start of the season, he struck out 17 of the 19 batters he faced.[4] At the plate, Dan hit .590 with 3 home runs and 17 RBI. The Baseball Factory named him to their 1st Team All-American squad, and he was picked as the NTL West MVP. He was the 2002 Pennsylvania State Gatorade High School Baseball Player of the Year[5], The Star Gazette (Elmira, NY) Male Athlete of the Year and The Star Gazette Regional Male Athlete of the Year. Cevette signed his NCAA letter of intent with George Mason University but ultimately decided to pursue a pro career after being drafted.

Dan also played basketball during his senior year, and he was named to the 2002 NTL West Basketball All Star Team. The Corning Leader (Corning, NY) and The Star Gazette, both named Dan to their All Twin-Tiers First Team for the 2002 Boys Basketball Season. His team won the 2002 NTL West Championship and the 2002 Pennsylvania State Class A District IV Championship. Dan was the starting center on the squad and averaged 14.9 points and 11.0 rebounds per game.

Cevette was selected by the Cleveland Indians in the third round (94th overall) of the 2002 amateur draft. He was signed by Bob Mayer.[6] After accepting a $400,000 signing bonus, Cevette was assigned to the Burlington Indians in the Appalachian League. He saw action in 13 games and went 2-4 with a 4.67 ERA. He got some more work in with the instructional fall league in Florida following the completion of the regular season.

Cevette suffered a torn bicep on March 24, 2003 during his second Spring Training start. After recovery and an extended Spring Training (6 games, 17 IP, 26 Ks, 1.06 ERA), Cevette saw time with both Burlington and Mahoning Valley in the New York-Penn League. For the season, he had a record of 2-7 with a 4.02 ERA. At Burlington, Dan led the team in games started as well as hits and walks allowed. Cevette spent another fall in Winter Haven, FL working on improving his pitches under the watchful eye of Charles Nagy. Much of the off season was spent at the Fischer Sports Physical Therapy and Conditioning complex in Phoenix, AZ building strength.

Cevette spent some more time at Mahoning Valley in 2004 and also climbed a rung up to Lake County in the South Atlantic League. While he was still with the Scrappers, Dan lost the finger nail on the middle finger of his left hand during a game. The nail had split during his first start of the season and got worse as the season went on.[7] He had his best season as a professional going a perfect 5-0 with 80 strikeouts in 80 IP. His combined ERA was 1.91 with a 1.09 WHIP. Among starting pitchers in the Cleveland farm system, Cevette had the lowest ERA. He earned South Atlantic League Pitcher of the Week honors for the week ending September 2. Dan spent his third fall in Winter Haven at the Indians Instructional Camp. While there, he was hit by a line drive just below the rib cage which required him to be rushed to the hospital. He was released once tests revealed no internal injuries.[8]

Cevette stayed at Lake County for most of 2005. He had a 5-4 record for the Captains and posted a 2.73 ERA with 85 strikeouts in 82 and a third innings. In April, while facing the Delmarva Shorebirds, Cevette's thumb was broken when a ball hit by Matt Houston ricocheted off his left hand.[9] He was finally able to return to the Captains on June 18.[10] Dan was called all the way up to the Buffalo Bisons in the AAA International League for one start. He gave up 8 earned runs in 5 innings pitched and took the loss - to date, it is the closest he has been to the majors. Following the season, Cevette had a MRI done, and it was discovered that there was a tear in the labrum muscle of his left shoulder. Surgery was performed in Cleveland in October.[11]

Following the surgery, Cevette was able to return to the mound in August. He was assigned to Lake County for the third straight year in 2006. Dan was limited to only three games for the whole season and managed just a 7.20 ERA and a 0-1 record.

In 2007, Cevette was used primarily as a reliever for the Carolina League Kinston Indians and the Eastern League Akron Aeros. His combined record was 2-1 with a 4.98 ERA and 36 strikeouts in 34 and a third innings. Cevette took another trip to the disabled list in July with a sore left shoulder.[12] During the off season, Dan served as a groomsman at the wedding of former teammate Aaron Laffey.[13]

In 2008, Cevette was assigned to Kinston and did not start any of the 17 games he appeared in. His final record for the KTribe in 2008 was 3-1 with 2 saves and a 7.11 ERA. His strikeout ratio was excellent with 31 Ks in just 19 IP. Cevette was placed on the disabled list with shoulder inflammation on May 1, and he did not return until May 16. On June 30, the KTribe was defeated 17-3 by the Potomac Nationals. Dan took more than his share of the beating by giving up seven earned runs and only getting two hitters out.[14] That night, feeling discomfort in his arm and seeing more time on the disabled list in his future, Cevette decided that it was time to retire.[15] The official announcement was not made until July 3.

In November 2008, Cevette had his shoulder examined by an athletic trainer. He experimented with sidearm deliveries and began regular workouts. After applying for reinstatement with Minor League Baseball, the Indians removed Dan from the inactive players list in December. In late January 2009, Cevette conducted a workout for Cleveland with scouts from several other teams present. The Indians were unable to offer Cevette a current roster spot and released him on February 2 making him a free agent. Eight teams inquired about his status, and on February 5, Cevette was signed by the Kansas City Royals to a one year minor league contract.

Cevette has been involved in training and coaching of young pitchers. He has worked with young players at Sunday baseball clinics at Elkland Area High School, and at clinics in Scranton that were sponsored by the Pittsburgh Pirates.[16] He has been listed as an instructor for the Sandlot Sports Academy[17] and has been helping high school prospects one-on-one like Talas Mahon.[18] He has also assisted in the coaching of the Elkland High Girls basketball team which his brother Justin coaches.[19]

Cevette has also been seriously involved in music. Under the performing name "Duce Aayo", Cevette became the lead rapper in a band known as Mack11 following the 2004 season. Following the release of an album the group has changed its name to Runnin On E. They perform on Cevette's own record label, Soldurz Entertainment.[20][21] A rapper known as "Tha Prez" has named Cevette as the producer of his latest album.[22]