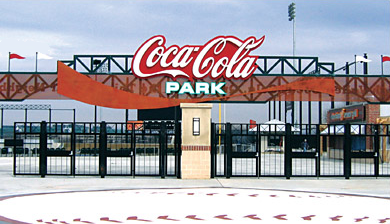 Coca-Cola Park, in Allentown, PA, is the home of the Lehigh Valley IronPigs, the Philadelphia Phillies' Triple-A East farm team, and the Phillies' 2020-2021 alternate training site during the Coronavirus pandemic.

Opened in 2008, the HOK Sport (now Populous) playpen landed the former Ottawa Lynx. It has 8,100 seats, yet its club averages more than that per game every year – and the average topped 9,000 for six straight seasons from 2009 to 2014. ""BaconUSA"" also hosts Pigs' odd-year games in the annual (U.S. Route) 222 Showcase with their Double-A Philly farm-mates, the Reading Fightin Phils.

On April 8, 2016, the IronPigs played an opening day doubleheader against the Syracuse Chiefs in front of zero fans. There were attenuating circumstances though: the games were originally scheduled to be played in Syracuse, NY, but persistent bad weather had made the NBT Bank Stadium field unplayable. The two teams thus agreed at the last minute to move the games to Allentown. Not only was there little chance to sell tickets to the weekday twin bill, Coca-Cola Park was undergoing construction, so the decision was made not to allow spectators.

The park's site was previously an electronics manufacturing plant on the banks of the Lehigh River. [1]