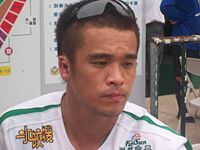 Chieh-Ming Chang is an outfielder for the Sinon Bulls and has played for the Taiwan national team in almost a dozen events.

Chang made the Taiwan roster for the 2006 World Baseball Classic and went 4 for 11 with a walk and a double as one of their better performers. In the 2006 CPBL campaign, he hit .284/.335/.365 and only stole 3 bases; the 21 in 2005 was the only time in his first four seasons that he reached double digits in swipes. He was with Taiwan for the 2006 Asian Games and 2006 Intercontinental Cup. In the latter event, he hit .405/.463/.595 with 8 runs, 7 RBI and a surprising 2 home runs in nine games for Taiwan, acting as their main right fielder; Chang only has hit 8 home runs in his first 1,107 at-bats in the CPBL. He tied Sharnol Adriana and Yoandry Urgellés for third in the 2006 Intercontinental Cup with 15 hits, trailing only Alexander Mayeta and Yung-Chi Chen. He tied 8 others, including former major leaguer Ivanon Coffie for second in home runs, trailing only Brad Harman. He failed to make the All-Tournament outfield as Urgellés, Giorvis Duvergel and Frederich Cepeda were chosen.

In the 2007 CPBL campaign, the outfielder batted .343/.389/.582 in 21 games for Sinon, his playing time limited by left elbow surgery early in the year. He was back in action for the 2007 Asian Championship, going 2 for 11. He was one of the top hitters in the 2008 Final Olympic Qualification Tournament, batting .480/.581/.640 to help Taiwan earn a spot in the 2008 Olympics. He tied Tom Brice and Matt Rogelstad for third in the event with 9 runs, trailing Yong-kyu Lee and Young-min Ko. He was 4th in average behind Joo-chan Kim, Jimmy Van Ostrand and Luke Hughes.

As the starting Taiwan right fielder, Chang hit .154/.233/.192 in the 2008 Olympics and made a throwing error that allowed Wei Sun to score the winning run in Taiwan's stunning loss to China.