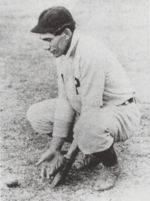 Second baseman Charlie Grant played in the Negro Leagues for fifteen years. He began his career with the 1896 Page Fence Giants and in 1899, joined the Columbia Giants. A light-skinned black man with straight hair, he worked as a bellboy at the Eastland Hotel in Hot Springs, AR. While there in 1901, he caught the eye of John McGraw during Spring Training. McGraw attempted to sign him to play for his Baltimore Orioles. McGraw attempted to pass Grant off as Charlie Tokohama, who was a full-blooded Cheroke. "Chief" Tokohama (also spelled as Tokahama or Tokohoma) played with the Orioles during spring training. The plan was foiled when Charles Comiskey, president of the Chicago White Sox, identified Grant as Columbia's second baseman. Grant had been described by Sporting Life by a "phenomenal fielder" and good hitter. Almost two months after the identification of Charlie as black, McGraw still was trying to get Grant onto the team, continuing to claim he was a Native American.

Sources: The Biographical Encyclopedia of the Negro Baseball Leagues by James Riley, The Complete Book of Baseball's Negro Leagues by John Holway