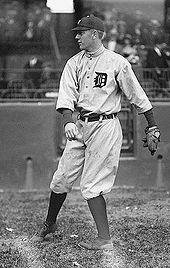 Born in California, he played most of his minor league career for Western teams. He was primarily a pitcher through 1916, but, after an arm injury which put an end to his major league career, then mostly played first base and outfield for another decade. Played for the semi-pro Merced Bears in the Central California League in 1921.He both pitched and played as a position player when he managed the Twin Falls Bruins in 1926.

Zamloch scouted for the Washington Senators and Cleveland Indians, signing Bob Loane and Mike McCormick. He was the head baseball coach at University of California, Berkeley in 1916-1917 and 1919-1929. During that time, he invented the game of reversible baseball (also called "left-handed baseball") and had his squad play it occasionally.

His father, Anton Zamloch, was a famous magician [1] and Carl himself was a professional magician. He even published a book on the subject of magic tricks.