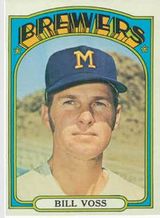 While Voss had a major league batting average of .227, it should be noted that he played during the second dead-ball era when batting averages were at their lows. As a fielder, he played mostly right field, with good range.

Through 2009 he is one of only two major league players with the last name Voss, the other one being Alex Voss.

His first Baseball Card appearance was in the 1966 Topps set.